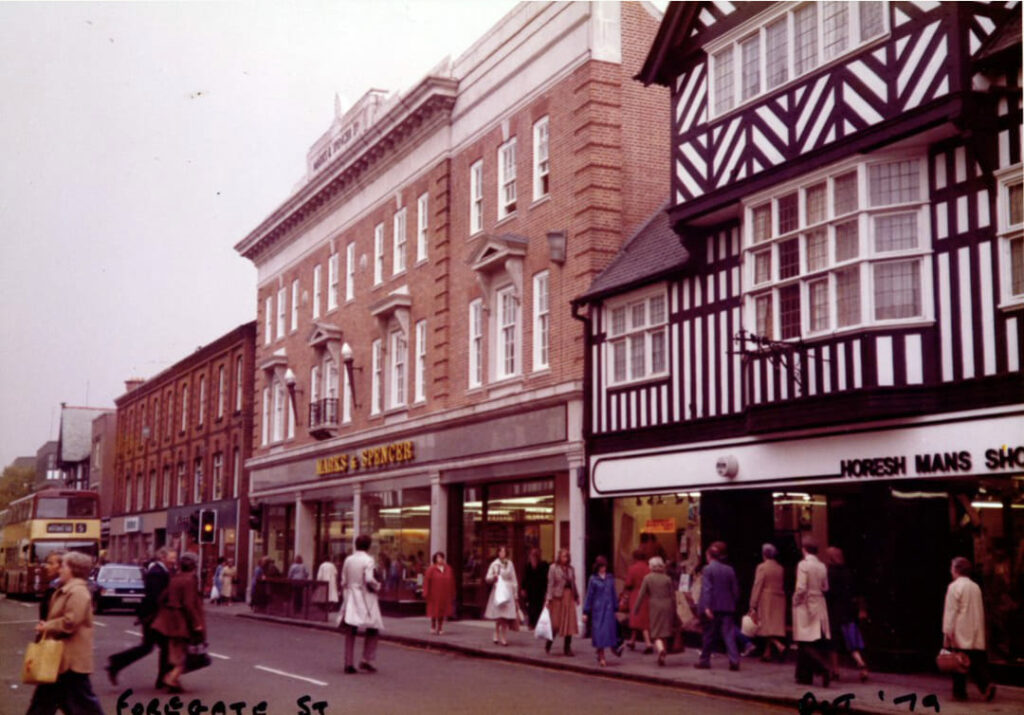 Marks and Spencer, one of the oldest businesses in Chester city centre will be celebrating the 90th anniversary of its Foregate street store in August. The company first came to Chester in 1909 with a Penny Bazaar at 103 Foregate street ( now Cafe Atina) before moving to their current premises in 1932. Staff and customers will be marking the special occasion with an in store event on Friday 12th August.

M&S Penny Bazaars retained the policy used by Michael Marks in his original market stall in Leeds of selling almost everything for one penny, apart from a few luxury items. The open displays of items on tables and the “Admission Free” sign outside encouraged people to browse, a marked contrast with most shops at the time, in which customers had to ask the shopkeeper for goods stored behind the counter. In the late 1920s M&S first began selling food and clothing. Whereas many other retailers in the 1920s and early 1930s were struggling, M&S had built up such a large customer base, who loved its own-brand products, that the Company was able to undertake an ambitious programme of expansion.

Larger premises were required in Chester and, for this reason, a new Marks & Spencer “superstore” was opened on 12th August 1932 following the closure of the Penny Bazaar. The Art Deco influenced Edwardian style building was designed by Norman Jones and Leonard Rigby two Manchester based architects. The store was extended in phases from the 1950s onwards with a first floor sales space introduced in 1978. Excavations during the 1990s expansion revealed traces of a Roman road and the remains of a medieval cellar.

The birthday celebrations will include a mini museum showcasing the history of the store with a photo exhibition from the M&S company archives as well as a display of 1930s fashions and M&S  clothing from decades past. Customers will be able to see vintage/ replica food packaging and encouraged to share their own memories of the company with a prize hamper on offer for the best memory selected. Shoppers will be serenaded with vintage songs by a live singer, and the iconic Percy Pig will be making a special appearance.

Store manager Laura Hockenhull commented : ” We are really excited to be celebrating our anniversary and are looking forward to sharing our history with all of our customers on the 12th August”

A Business Improvement District (BID) is a business-led, business-funded body created to improve a defined commercial area. Chester BID is funded solely by the businesses within the city.

There are over 460 businesses in Chester’s BID area with a rateable value of more than £18,000. Each of these contribute a levy equal to 1% of their business rates every year to fund a wide range of improvements identified by the businesses themselves. It is expected that approximately £2.5m of private sector funds will be generated over the five-year BID term and this money will be reinvested back into the city centre.

In June 2019, hundreds of businesses voted in favour of the plans to renew the BID’s term in Chester and on September 1st, 2019, Chester BID Company started a second five year-term

with the intention of continuing to deliver a more vibrant and successful trading environment for Chester city centre.