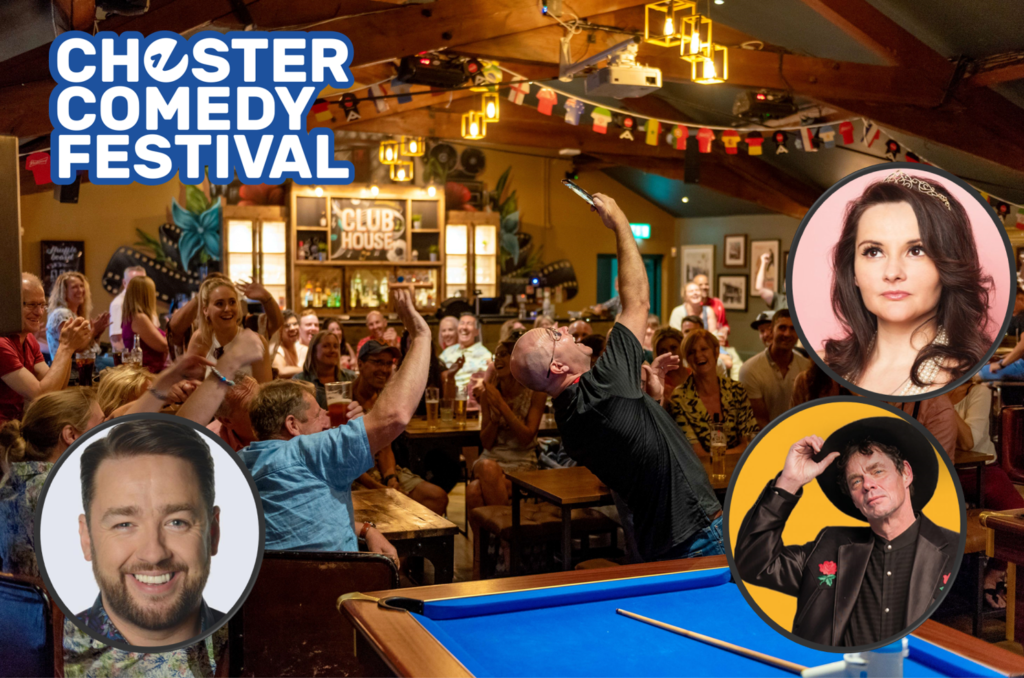 Chester BID has announced the much-acclaimed comedy festival that runs throughout city venues is set to return in summer 2021 with some of the UK’s biggest comedy stars.

Chester Comedy Festival will return to delight a post-pandemic audience in need of laughter.

Launching on July 11th, Chester’s comedy festival will be set in 12 interesting and atmospheric venues throughout the city’s historic centre, from pubs to restaurants, the city’s cathedral, Storyhouse, Chester Market, Grosvenor Shopping Centre and Chester Racecourse.

In the space of 12 days, 35 comedians will, along with stand-up performances, host comedy dinners, comedy pub crawls, children’s events and a New Comedian of the Year Competition sponsored by Concept Mortgages. The city centre will come alive with the laughter from acclaimed funny men and women including Jason Manford, Ed Byrne, Reginald D Hunter, Gary Delaney, Maisie Adam and Rich Hall who closes the festival on Thursday 22nd July.

Comedian Jason Manford commented: ‘It is really great to be getting out and playing in front of live audiences again and I’m really looking forward to playing at this year’s Chester Comedy Festival’

Organisers Chester BID decided to go ahead with the 2021 festival despite restrictions potentially staying in place. They will design each event to fit in with the possibility current restrictions won’t be relaxed and release more tickets when and if possible.

Carl Critchlow, BID Manager said: ‘It’s our role as a BID to put every effort into the recovery of our city centre and our annual comedy festival is just one part of that. Now more than ever we need joy, normality and fun. Everybody joining us will be playing a big part in the city’s recovery – both with their feet and their laughter.

He added: ‘We’ve kept the prices for these shows deliberately accessible, with free family events and other shows starting from as little as five pounds. This is about joining our community back together for fun times again – and we want everyone to be able to join in.’

For more information and to book tickets www.chestercomedyfestival.com