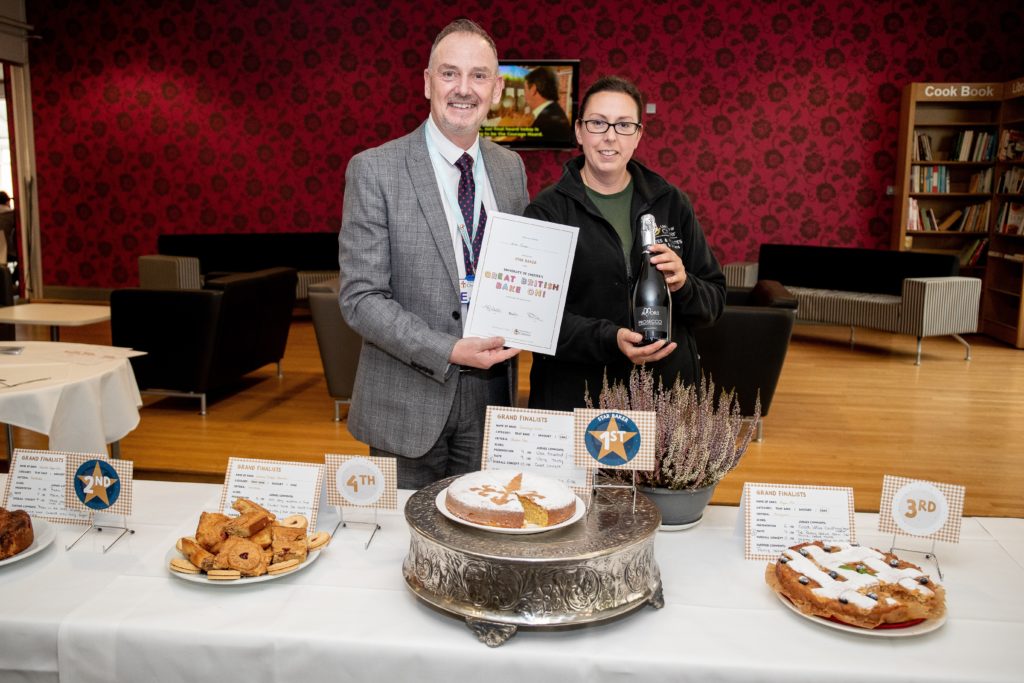 Queens of Tarts competed alongside Soggy Bottoms and Jammy Dodgers to raise hundreds of pounds for charity in a celebration of baking expertise, organised by the University of Chester.

Over the summer, University staff held internal team bakes in the first rounds of its Great British Bake On competition. As the grand final took place, the event was hailed such a success that already plans are afoot for next year’s cake fest.

Heather Johnson, of the University’s Estates and Facilities Department, who helped organise the contest with her colleague, Lisa Weaver, said: “More than 55 people, from novice bakers to kitchen experts, wielded their rolling pins for the competition and many more got involved with tasting and voting for their team bakes – it was fantastic!”

The culinary extravaganza raised just over £340 for PSPA, a national charity that supports people with Progressive Supranuclear Palsy and Corticobasal Degeneration (CBD).  Lisa said: “As well as supporting the charity, we wanted to show that even with baking, people can still think about sustainability and encourage green initiatives. So, we asked the bakers to focus on one of our criteria – vegan, gluten free, Fairtrade, sugar-free or home-grown produce and it was a huge success.”

Eight teams from different University departments, many with themed names including Baking Babes Bite Back and Soggy Bottoms – a tribute to the phrase made famous by the Great British Bake Off doyen, Mary Berry – produced special cakes to each find their own Star Baker, who went on to compete in the grand final.

The ultimate reveal, which included apple cakes and blondies using Fairtrade and homegrown ingredients, was enjoyed by residents from local retirement housing complexes, Homedee Housing and Sarl Williams Court. They watched as judges gave their feedback and marks before being treated to afternoon tea – a taste of each original bake and a cup of tea.

Lisa added: “Residents were thrilled to be involved and spending time with them really gave the event a community feel. Many asked to be involved in further events at the University – they really enjoyed the engagement.”

The judging panel boasted experts from the catering industry, including Ian White, the University’s Domestic Bursar and Executive Director of Hospitality and Residential Services, the University’s Artisan Baker, David Quinn, and PSPA representative, Hayley Chriscoli. They awarded marks for presentation, taste and overall concept of the eight final bakes.

Head judge Ian White said: “All the final bakes were of a very good standard and it was a great event that created great camaraderie between fellow staff members.”

Lisa Owen, Grounds and Gardens Apprentice, took the Star Baker accolade for her Santiago Cake, Gluten Free. She will be rewarded with the opportunity to work with David Quinn to recreate and produce her winning bake recipe, which will then be sold at the University’s shops, restaurants and cafes.

Heather added: “Feedback from those involved has been phenomenal. A real team feel was created bringing staff from across the University sites closer together.  We hope to continue this great competition next year – so, for anyone interested, watch this space!”

PSPA representative Hayley Chriscoli, who talked about PSPA and the work of the charity, said: “It was a privilege to be involved in the University of Chester’s Great British Bake On.

“Connecting with local residents and raising awareness of PSP and CBD was a fantastic opportunity. Thank-you to all involved and a big well done to the overall winner, Lisa!”