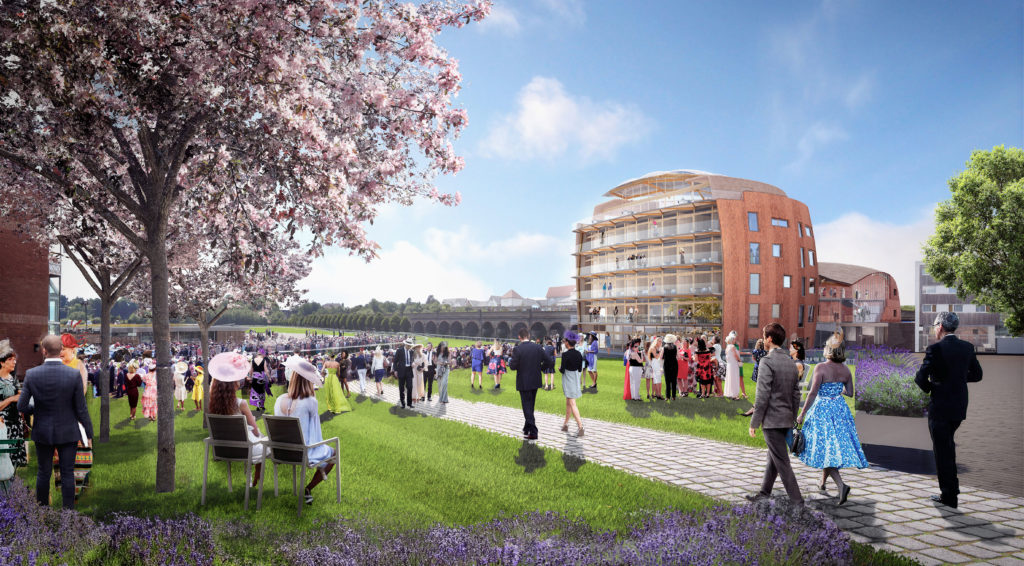 Chester Race Company has re-submitted its long-term Masterplan for development at the racecourse.

After planning permission was refused in March 2019, the racecourse spent a period of consultation addressing the key concerns raised by the Planning Committee, before approaching Cheshire West and Chester Council with a revised proposal. The updated plan sees the two key buildings in the development proposals combined into a new Conference Centre and Grandstand, located next to the Holiday Inn Express hotel and overlooking the racecourse.

In a carefully considered response to local residents who had raised concerns against the original application, the racecourse has now withdrawn its plan to build a multi-storey car park and to use Saddlery Way to access the Roodee on racedays. Instead, it is proposed that cars will use nearby Kitchen Street and an existing route through the railway arches.

In a further move, a large public lawn has been introduced in place of the Leverhulme Stand. The lawn will extend from the County Stand to the new development and will become the focus for the revised scheme, drawing on the sustainability and benefits of green space within the plan and opening up views of the racecourse from Watergate and the City Walls.

Racecourse architects describe the new application as having these key elements:

“The Masterplan is very important to the future of the Race Company and represents a massive investment in Chester. We have worked hard since March to deal with a number of objections and are very pleased with the public response so far. The Conference Centre and Grandstand will be a fantastic Civic building for the City and, on racedays, provide a new viewing and hospitality Grandstand like no other. With a strong focus on sustainability in its design, construction and use, this innovative new building will again put Chester at the forefront of the UK’s major sporting venues.  This will be a project which the Race Company and the city can be very proud of.”

The application is expected to be considered by the Planning Committee in August and, if approved, a first phase of work would begin in the autumn.