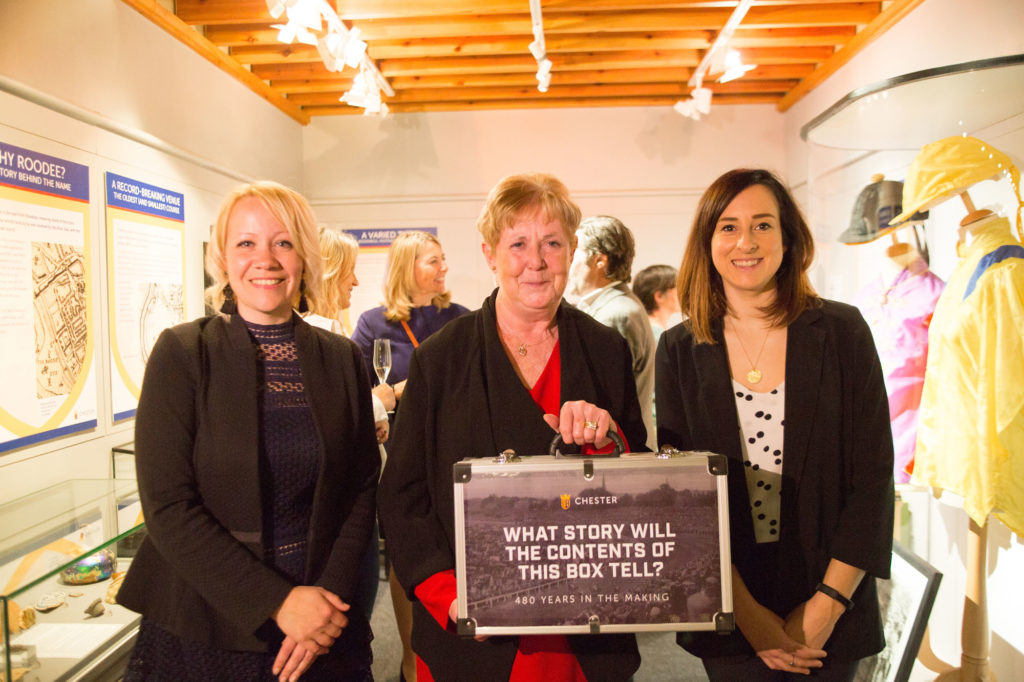 Chief Executive of Chester Race Company Richard Thomas, made a very special announcement at the preview event for a new Chester Racecourse pop-up exhibition this evening, at the Chester Grosvenor Museum.

Ahead of the unveiling of ‘Going the Distance – 480 Years of Racing at the Roodee’, a pop-up exhibition to commemorate 480 years of racing at Chester Racecourse, it was revealed to guests in attendance that Chester Racecourse has this week been awarded an official Guinness World Record Title. Chester is now officially recognised by Guinness as the ‘oldest racecourse still in operation’ – a world first.

Established as a racecourse in 1539 under decree of Mayor Henry Gee, the famous site of the Roodee dates back to Roman times and presents a rich tapestry throughout the ages. From changes to the landscape to racing industry firsts, Chester has never been a racecourse to stand still. With firm values linked to both heritage and innovation, the racecourse has mastered a fine balance between these two ideals.

As attentions turn to the impending new season at Chester, a collective narrative that brings to life the history of Chester Racecourse is unveiled at the Chester Grosvenor Museum. Members of the public can visit the pop-up exhibition free of charge between 20 April and 6 October 2019 to learn about the history of the course and view artefacts and objects of interest.

To commemorate the milestone of 480 years, Chester have produced a special video which highlights some of the key moments in the course’s history, whilst unveiling some of the favourite memories and moments of individuals connected to Chester over the past few decades.

Michael Owen, Joint Owner Manor House Stables and Racehorse Owner said:
“Owning a horse, the whole buzz that goes with it and having a runner at Chester, my home track, was the start of a love affair that lasts to this day.”

Richard Thomas, CEO of Chester Race Company said:
“We are absolutely delighted to be have been presented the title of Oldest Racecourse still in Operation by Guinness World Records. The accolade couldn’t have come at a better time as we celebrate our 480th year on the Roodee and are about to begin another season of racing at Chester. We are so proud of the engaging, immersive experience we provide each raceday at Chester and believe the mix of atmosphere, colour and vibrancy we produce is second to none.”

For more information about the exhibition, visit https://www.chester-races.com/latest/news/going-thedistance-480-years-of-racing-at-the-roodee

Entrance to the museum is free, but objects as well as monetary donations are gladly welcomed.

Tickets and badges to all fixtures across the 2019 Chester racing season are currently available to purchase online at http://www.chester-races.com or from the Chester Racecourse Box Office – 01244 304 600.

Image above: Elizabeth Montgomery Collections and Interpretation Officer West Cheshire Museums, Di Riley of Deafness Support Network and Stephanie Hughes Head of Marketing from Chester Race Company, following the announcement of the ‘You, Me and Tea’ initiative to be held at the museum on Tuesday 7 May.